At long last, Royesville has a high school. The official turn over and dedication of the Rebecca James Memorial High School recently took place in Royesville, Lower Montserrado County.

Presenting the keys of the school complex to the Ministry of Education, the Vice Chairman for Finance of the Liberia YMCA, Mr. Abraham B. Samukai said he was humbled on behalf of the national board of the Liberia YMCA that Madam Rebecca James could look back to remember the people of Royesville- by providing funds from her estate for the construction of a high school in Royesville.

“The challenges of young people she may have experienced in Royesville owing to the lack of a high school led Madam James in doing what she has done for you all.” Mr. Samukai said. “It is therefore my humble duty and pleasure to turn over the keys to the government of Liberia through the Minister for Education.” The YMCA official said.

Receiving the keys to the school complex, the outgoing Deputy Minister for Instructions, Hon. Hawah Goll-Kotchi asked for a minute of silence in memory of the Late Madam Rebecca James. Hon Goll-Kotchi through a family member, Momo Lee thanked Madam James for dedicating her treasure so that the children of Royesville can be educated.

“This should serve as an inspiration to others that when we leave our country, we must look back.”

Hon. Kotchi further said the completion of the construction of the school complex was “a pleasant surprise” as most Liberian contractors do not perform to expectation. She praised the YMCA for the stewardship and results delivered on the project.

Speaking to the challenges in the Liberian educational system, She told the gathering that the Ministry of Education will not accept volunteer teachers as the ministry wants qualified teachers to improve the learning outcomes of Liberian students; citing the mass failure in WAEC Exams.

She remarked that the government was committed to improving the quality of education and supporting the development of additional new educational facilities around the country.

Earlier, the National General Secretary of the Liberia YMCA, Mr. E. Edward Gboe said the Liberia YMCA was able to fulfill the wish of a daughter of Royesville and a patriot of Liberia by the completion and dedication of the school complex.

He praised the support of the Ministry of Education, the local leadership of Royesville and the International Division of the US YMCA.

He said it is a good thing that Royesville now has a high school as many children upon completing Junior High School in the Township leave to attend schools either in Tubmanburg, Bomi County or move to Monrovia for high school education.

He reflected on the social challenges when children are not reared in the homes of their biological parents.

Mr. Gboe put the cost of the facility and associated management and legal fees to about US$250,000 and said about 9% (or US$22,000) of the total cost was subsidized by the Liberia YMCA.

“I am pleased to say thanks for the support and attention you all gave during the construction of this school.” He concluded.

The Commissioner of Royesville, Hon Edwin Mathies thanked the YMCA for the construction of the school. “Statistics show that 57% of contracts given to Liberian firms are incomplete, but in the case of YMCA, you have completed 100%.” Commissioner Mathies told the gathering. He appealed to the Liberia YMCA to assist the people of Royesville in other areas.

He appealed to the Ministry of Education and District # 7 Representative, Hon. William Dikel to assist in equipping the school.

“The YMCA has done its part, now you must fulfill your duty on the tripartite agreement entered into by the YMCA, the Ministry of Education and the Township of Royesville. The YMCA has completed its part”

Making remarks at the ceremony, Montserrado County District # 17 Representative, Hon. William Dikel also praised the Late Madam Rebecca James for her thought of the people of Royesville – adding “even through darker days, there are people who mean well.”

He also thanked the people and elders of Royesville and the Parent Teachers Association of the School for their assistance in getting the school constructed and recommitted himself in continuing his advocacy for attention to projects, including support to the school, under allocations for Legislative projects under the national budget.

Following the dedicatory ceremony, the guests toured the school facilities which include six classrooms, library and laboratory rooms, teachers' quarter and reservoir with power pump to supply water to the facility.

The school is named in honor of the Late Madam Rebecca James, a citizen of Royesville, Montserrado County, Liberia, whom through her estate made possible the funds for the construction of the school. Construction on the High school began in late 2013.

The late Madam Rebecca James Memorial High School will provide increased access to education opportunities for young people completing junior high school education in Royesville as there has been no high school in the District of Royesville.

Newly Constructed High School to be Dedicated in Royesville 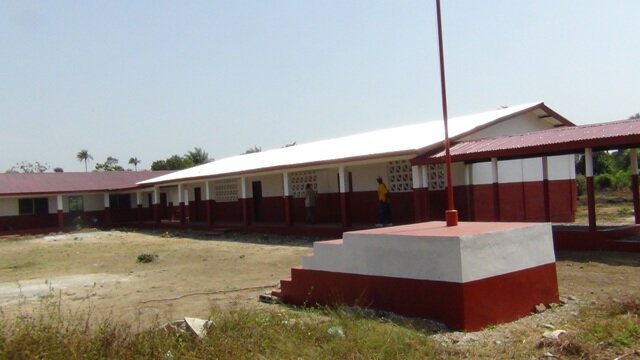 The school is named in honor of the Late Madam Rebecca James, an immigrant to the United States from the Township of Royesville.

Madam James then a resident of Queens, New York, USA, in her will, left her estate in the USA and committed the proceeds thereof for the construction of a school “for the education of the children of Royesville” through the Liberia YMCA.

The Liberia YMCA in partnership with the International Division of the YMCA of the USA and the Ministry of Education supported this initiative to construct a modern secondary school complex at a cost of US$250,000.

The dedicatory ceremony will take place at 10:00 am in Royesville, Lower Montserrado County. The outgoing Deputy Minister for Instructions, Ministry of Education, Hon. Hawah Goll Kotich is expected to perform the ceremony along with an array of officials of the county and the YMCA.

Those expected to be attendance include the District #7 Representative, the County Superintendent, and other officials of the Ministry of Education and the Liberia YMCA.

The school named in honor of the benefactor, the late Madam Rebecca James, will complement the government of Liberia's goal to increase access of students to improved facilities and quality education.

The facility contains six classrooms, library and laboratory rooms, teachers' quarter and reservoir with power pump to supply water to the facility.

The Liberia YMCA in partnership with the YMCA of Greater Toronto has begun a number of interventions to help reduce the spread of Ebola through community awareness and engagements with adolescent young girls and women. 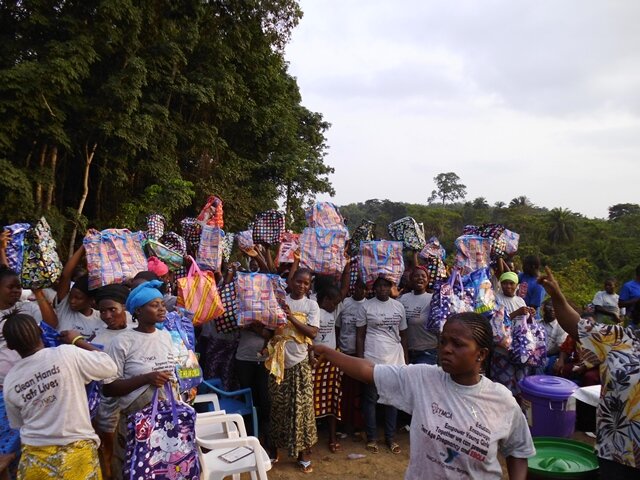 Recently in Wainsue, Bong County and Zorzor, Lofa County, IEC and personal hygiene materials as well as hand washing barrels and detergents were provided to over 400 girls and 10 schools, respectively, as beneficiaries in the two districts to help increase awareness about the spread and dangers of ebola, particularly targeting adolescent girls and young women through peer education, awareness and peer support initiatives. 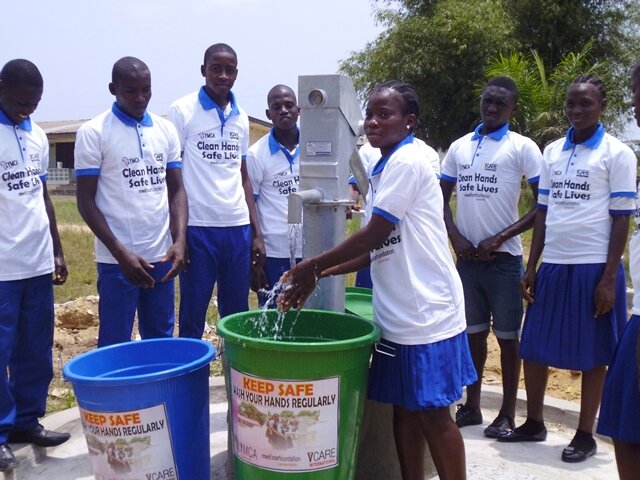 Speaking during the presentation of the materials in Wainsue, the Health Coordinator of the Liberia YMCA, Mrs. Monica Quaqua said the intervention by the Liberia YMCA also involved stakeholders' engagements at the community level including coordinating with the respective health teams and local leaders on helpful actions to prevent the spread of ebola and increase girls' awareness on reproductive health.

Mrs. Quaqua said the YMCA has also trained 10 project staff which comprised of 6 female peer educators, 2 female site coordinators and 2 branch coordinators in Bong and Lofa counties in hygiene and reproductive health skills and as well as ebola awareness and how the virus can be prevented.

Speaking during the presentation in Wainsue, Bong County, a proxy for the District Commissioner, Peter Gonta praised the Liberia YMCA and partners for the interventions.

“The donations by this institution today are highly appreciated”. Mr. Gonta said. He also challenged the beneficiaries to make good use of the materials especially in this period of ebola in Liberia. 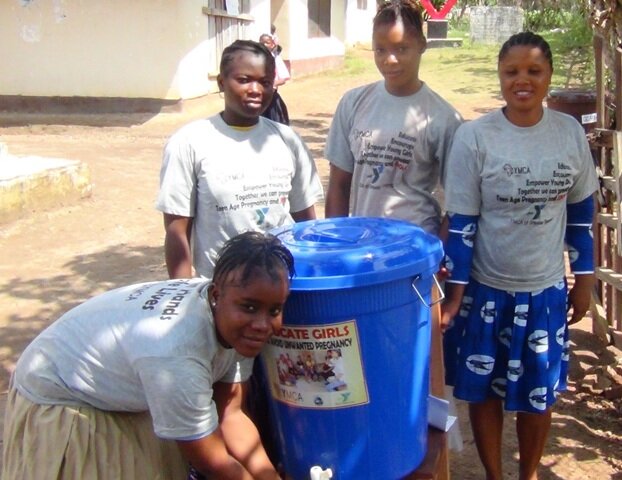 In Zorzor, a Youth Leader in the district said youths of the community were grateful to the Liberia YMCA and partners for their work with the people of the district during this ebola period.

He thanked the Liberia YMCA for the initiative being carried out to increase adolescent girls' access and participation at community levels and to enhance their awareness and skills in overseeing their reproductive health in addition to the risk to their health in the face of the ebola outbreak.

It can be recalled that earlier statistics released by the Ministry of Health of Liberia confirmed more cases of ebola among women and girls due to their traditional role as caretakers of the home and sick family members, and as cleaners.

The Liberia YMCA has in the past few months been involved in several activities around the country to respond to the ebola outbreak.

In supporting the national fight against the ebola virus disease, the organization's initiatives have included ebola prevention awareness through peer education, collaborating to strengthen local leaders and local organizations capacity to respond to the outreach, providing food aid, food-for-work scheme, repair of community facilities and support for the revitalization of small businesses of especially female headed households in different communities around the country. In recent times, the YMCA has also constructed or repaired about a dozen hand pumps at school campuses in Margibi, Bong and Nimba Counties to increase access of students to clean water to improve sanitation on school campuses, with funding from Medicor Emergency through Y-Care International, England.